Depending on how savvy Siri is on your smart phone, she would come up with St. Thérése the Little Flower or St. Teresa of Avila, maybe our newest St., St. Mother Teresa of Kolkata OR even St. Teresa Benedicta of the Cross also known as Edith Stein.  St. Thérése was the model and inspiration for St. Mother Teresa.  When you look at their two lives, their simplicity is identifiable in their spirituality.

Since Oct. 1 (or October 3 in General Roman Calendar) is the date we celebrate St. Thérése of Liseaux,   it is timely that we share who she was.  Some of what I share with you, may be facts familiar to you, others not quite so.  Born as Marie Francoise-Thérése Martin on January 2, 1873, she was from Alencon Orne, France and died 24 years later of tuberculosis on September 3, 1897.  It did not take the Church long to beatify her which was done on April 29, 1923 by Pope Pius I and canonized just two years later.  If you read her life, Thérése joined two of her older sisters in the cloistered Carmelites community of Lisieux, Normandy.

St. Thérése of the Child Jesus and the Holy Face, O.C.D. (Order of Discalced Carmelites, so the nuns were barefoot has been widely venerated in modern times and is popularly known as “The Little Flower of Jesus” or simply, “The Little Flower.”  She is known though as the Saint of the “little way” or simplicity and practicality which was  her approach to the spiritual life.  This models that of St. Francis of Assisi and the two are probably the most popular saints in the history of the Church
Interestingly enough, Thérése was named as “Patroness of the gardens of Vatican City” and a little known fact that she was granted the title by Piux XI “Sacred Keeper of the Gardens.”  Her Basilica of Lisieux is the second largest place of pilgrimage in France after that of Lourdes.  Although she never strayed from the Carmelite convent, she desired to give herself wholeheartedly as a missionary was and was named Co-Patroness of the Missions in 1927. “My vocation is love…In the heart of the Church, my Mother, I shall be love” Other causes for which some may appeal to St. Thérése include as HIV/AIDS sufferers, radio care-a-thons, florists, gardeners and loss of parents.  She was named Doctor of the Church in 1997. 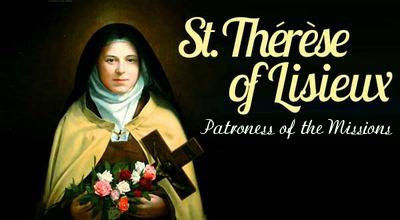 As I was writing this information about St. Thérése, I was reminded of little humorous story from my novitiate days at our Motherhouse in Illinois.  St. Teresa of Avila was referred to as the “Big Teresa” while the “Little Thérése” was St. Thérése of the Child Jesus.  At our Motherhouse, we had only one movable statue of a St. Teresa and it happened to be the one of St. Thérése, the little flower.  One of the members of the General Council, Sister Theresa, was a stout woman who gave a warm bear hug.  It happened to be her feast day, July 15.  We Novices wanted to do something special for her name day.  So we conceived an idea of moving the bigger than life statue on a dolly to the middle of the dining room.  So—in the dead of night—we moved her into the dining room, with a sign that said, “Is this Teresa big enough?” Happy Feast day!  Of course all the Sisters wondered who did this but there the statue remained until our Infirmarian, Sr. Mary John, hit her head on Thérése’s outstretched hand and statue needed to be restored to her original location and thus ended our escapade which we thought was a very funny and a creative way to celebrate Sister Teresa.

There are many stories circulating about St. Thérése being identified with roses, remember, she is patroness of the gardens!  While I don’t have a specific story to share with you, it is said that when someone prays to St. Thérése, a rose is sent as a sign.  “I will spend my heaven doing good on earth.”  Her autobiography, The Story of a Soul, contains unedited manuscripts and poems and will give you a more in depth picture of St. Thérése that Pope Pius Xi called her “the greatest saint of modern times.”  Indeed, she has been a significant model of sanctity for Catholics and others because of the practicality and really the simplicity of her spiritual life.  May your answer to prayer come in the form of a rose.